Quite a hiatus there, wouldn’t you agree?  What better way to put an end to a drought that with a torrential downpour?  Today’s refreshing shower comes in the form of The Thief, a Skyrim fan-film headed by the aspiring student-turned-director Chris Wood of the University of Worcester.  That’s in England, folks!  Chris is the director/producer/camera assistant/visual effects artist/creative force behind The Thief.  The film acts as his Final Project to formally mark his leave from academia and really show the world his stuff.  And man, what a way to go.  So, without further adieu, I’d like to present my interview with Chris Wood.

Lo-Ping: First, give us a short summary/teaser of what The Thief is about…whatever you can reveal. And why specifically a thief character over other classes in lore?

Chris Wood: Let’s see. The best part about Oblivion / Skyrim, in my opinion, is the Dark Brotherhood and Thieves Guild aspect. I adore it. The Thief is about all these elements wrapped up into a short film. The basic plot is that, due to the Stormcloak Rebellion, the Count of Bruma is worried that rebels will bleed into Cyrodiil from Riften. So he sends the Draconian Madstone over to Riften to help propose a peace treaty. The very same Draconian Madstone which is incredibly valuable… 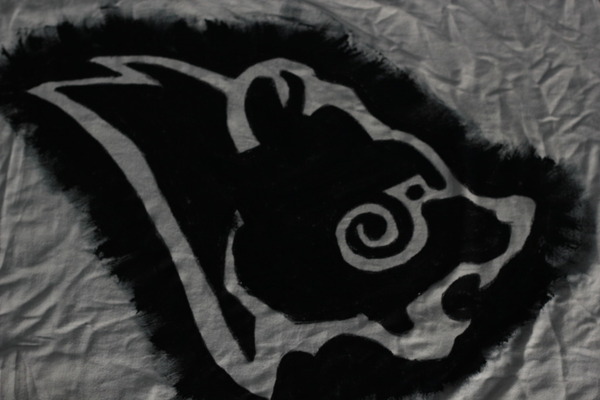 LP: From initial idea to end of filming, how long did it take for this project to take shape?

CW: I started thinking about doing a Skyrim Short film whilst lying in bed at 4 in the morning. I’ll leave the why for later, but I actually started pre-production in early January when I asked my buddy Sam Kearns if he could turn the rubbish in my head into a script. Initially I actually wanted a “The Warrior” style of gameplay, and spoke to numerous blacksmiths about crafting real armour (though thin for theatrical purposes) for a Dovahkiin character.

It was about late February that the heat was turned up on the pressure cooker and I started looking into locations, props, actors, costumes etc.

LP: Tell us about your cast. Where did you pluck them from? Any stories to share that happened during filming?

CW: Luckily I’m in a little click at University so I have plenty of friends with talents to hand. This film is pretty much my own project. Nobody from University really had any hand in the conception of my film. That said I had some great help from a few friends that drove me here and there to look at locations and costumes, and to that I still owe them my thanks.

My crew was an amazingly talented audio engineer, I took on Directing and Directing of Photography and Camera Man, which, in hindsight, was a mistake. I’ll let you know more on that later…

The cast I scoured over Casting Call Pro. I had SO many problems with actors and actresses… you wouldn’t believe it.  I had one actress pull out RIGHT on the day of filming! Yikes! In the end I managed to get the one person on Casting Call Pro with long hair, a hard jaw, and a rough beard to be my Dovahkiin.  And from there, it was finding a couple sexy ladies for Vex and Astrid, and then a young man for Jon, etc. Unfortunately I didn’t have the time or the money to get them to Worcester to audition. Oh well! 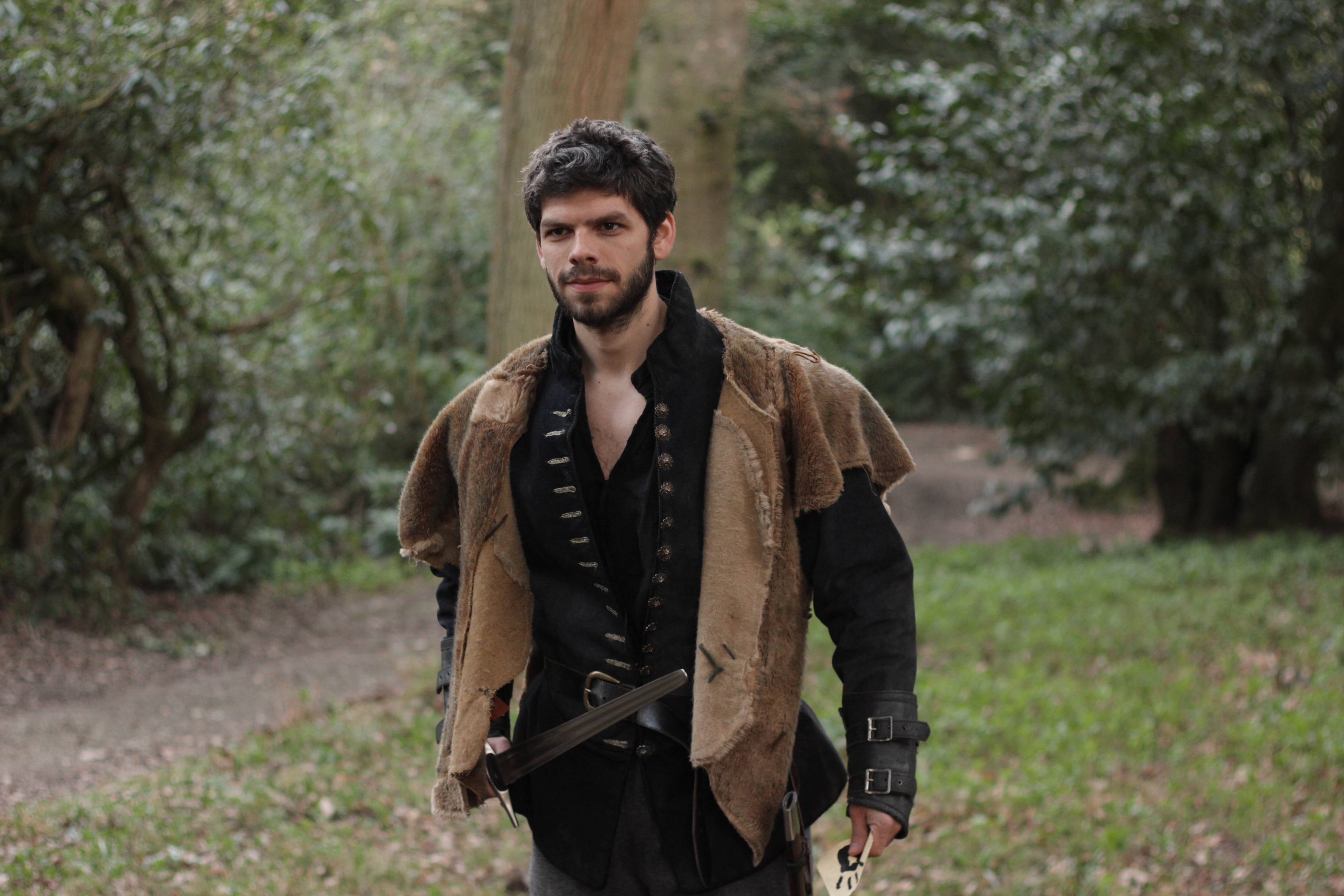 LP: Was there anything outside of the original source material that contributed to the creative process?

CW: Yeah, Game of Thrones. I freaking love that show! It was a massive influence both in the costume and in the dialogue. I think that the creators of GoT got the dialogue just right. It’s all medieval lingo, but it doesn’t sound lame. I love my script-writer to bits, and he’s a great novelist.  But the first couple scripts I got were more suited to novels, not a screen play. The dialogue would have sounded too hammy, so I had to make a bunch of changes. Regardless, it was Sam who got me started with a great story about some sneaky guys (and gals) and The Thief (which releases in June) will hopefully be a testament to the hard work and effort that myself and my team have poured into this project.

LP: Is there any one aspect of your project you’re PARTICULARLY proud of?

CW: The first scene I shot was the Thieves Guild scene at this amazing location called Drakelow Tunnels. It’s 250,000 square feet of abandoned military tunnels that you could drive tanks through, it’s massive. And scary. And awesome! The scene we shot there just went off perfectly, and Vex’s actress Kathryn was great. The actor who played Delvin (Daren) was from my Uni, as soon as I played Skyrim and got to the Thieves Guild I just thought “DAREN?! What are you doing here!?” He really is the spitting image of Delvin. It’s great. 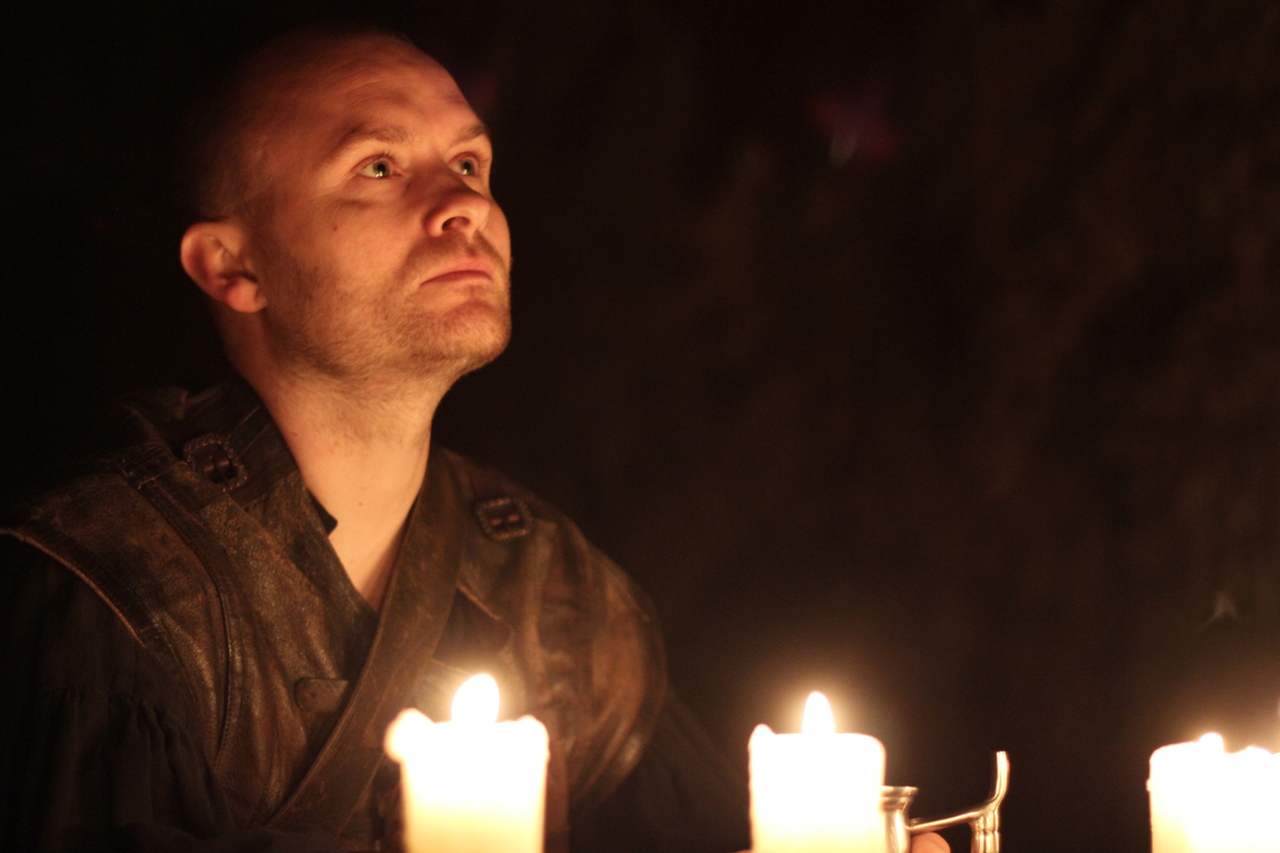 LP: What inspired the creation of this film? Obviously TES is the source material. But what made you go, “I want to make a film out of this”?

CW: My main focus at University is Visual Effects, and I really just wanted a film that would serve as a vessel for me to do awesome VFX. I didn’t want some corny action film with cliché bullet hits and 20-something year old actors acting like they’re ‘ard nuts. It just doesn’t work and I think this is the most common downfall of student films – kids in gangster films, etcetera.

So I was in bed at 4am, it must have been like, October ’11… and I just kept playing over in my head that it was totally possible to make a Draugr tomb in our video studio and have my housemate, who looks startlingly like Dovahkiin, have some kind of battle or something like that. I think in the end I scrapped that particular avenue because it would have been too expensive… Looking back I think it would actually have been cheaper! Which leads me to…

LP: Lets talk money. How much did this end up costing to make? How did you come up with the funds?

CW: Oh God… Let me just say, Initially with the Draugr tomb I was like “I’m willing to spend £200 of my own cash on this” (My Grandad is a good carpenter and could have helped with the sets).

Then, I changed the idea to Dovahkiin on a Skyrim-like mountain, and needed armour from a Blacksmith. One Blacksmith quoted me £400 for the shin guards, wrist guards, helmet and circular plates on the chest and shoulder…

Then, I changed my idea to “The Thief” and after a few script re-writes, I had a film that had like 8 different locations, 7 actors from across the country, expensive location hire and the need to travel bloody everywhere.

It ended up costing me a good £800-£1000. I can’t tell you the exact figure because… I don’t know it. I put it all in a budget, but one of the costume hire companies overcharged me quite a lot, I voiced my concern and they said they would re-do the pricing, and I never heard back from them. Free costume hire, baby!

It was all funded out of my own pocket. The University gave me £30 towards it (Cheers!) Though two of my friends gave me their £30 because they are lads! It was money from my savings, and if you go to www.indiegogo.com/thethief, you can see my fundraiser site where I’m hoping to recoup a portion of my losses. 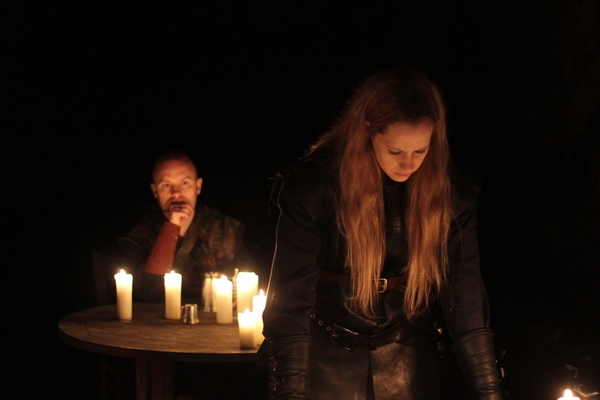 LP: Looking back, is there anything that you would have done differently?

CW: Yeah, had a proper, full production team for one.  And two, I’d have gotten better lights and better camera lenses. I had two lenses to shoot with on my DSLR – a cheap but good-for-the-price lens called the Nifty Fifty (Canon 50mm 1.8) and this 30 year old lens I had converted to work on modern cameras (Canon FD 28mm 2.8) I kind of wish I had bought a couple more professional lenses as they both ended up letting me down in filming. The 50mm would focus PAST infinity and take everything out of focus, and the image quality on the 28mm is just too soft. Bad choices on my part, and as such a lot of shots had to be thrown out because of bad image quality.

LP: Any very noteworthy challenges come up worth mentioning?

CW: After filming the Thieves Guild I thought the rest of filming would be a piece of cake. Oh, how wrong I was. The next scene was at this place on the border of Wales called “Longtown Castle” which I was using to be the location for “Darklight Tower” (which, if you look on your map, is near Riften.  Accuracy, YAY!)

By the time we got there, light was dropping fast, and it ended up messing up the dialogue sequence when Jon and Dovah reach the tower. When we got to filming the scenes inside the broken-down keep, we lit a campfire and then used these battery-operated lights to add some more light into the scene.  The result looked pretty great.

I was quoted by the technician that the light would last for 2-3 hours on a full charge – they were 100% charged.

About 40 minutes in, halfway through a dialogue scene, the light just crapped out. That was it, we had no secondary light source, and the scene was too dark with just the campfire. We had a moment of “Do we continue or do we go home?” We decided to continue with the most ridiculous set up for lighting ever – I would shout “Rolling. 3, 2, 1, action!” Then we would have whatever actor wasn’t on screen pour candle wax into the campfire, which would make it flare up for about 5-10 seconds, throwing ample light around the scene. To get a fill light going, I had a crew member hold an Iphone with the LED torch on through a yellow gel next to the actor to give the scene some extra light.

It was just the most ridiculous method of filmmaking I’ve ever seen, but what could we do? The costumes, swords and actors (two of which I was putting up at a Travelodge) all had to go back after the three-day period. There literally was no time or method to do a re-shoot, so we had to use what he got. At the end of the day it kind of works, but I’d love to reshoot that whole scene again as there were loads of changes to the script.

I’d also love to punch that lying technician in the face. Know what he said when I talking to him about the lights? “Yeah they last 2-3 hours. On a generator.” Sorry, but a generator will power the lights for as long as you have fuel. Liar. 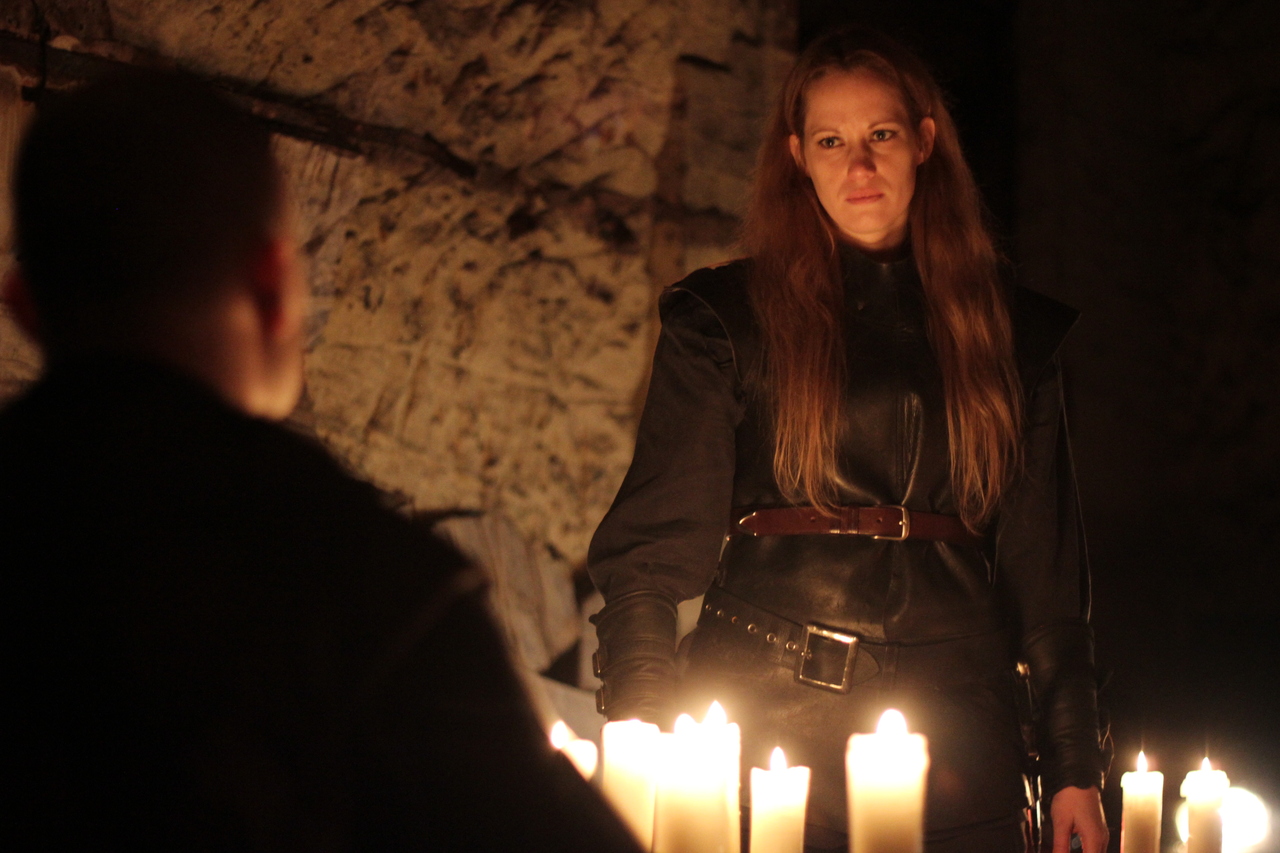 LP: What advice would you have for any other aspiring youths out there who would like to do something similar?

CW: Haha! Work in a God-damn team! By myself I had to do:

At the end of the three-day filming period (and during) I was totally mentally and physically shattered. I was down and out. Ballbagged. Cream-crackered. You name it. [Editor’s note: This means he was tired, in case you got lost in translation.]

But at the end of the day, be more impulsive. Aspire to make something better than anyone else, be ambitious and just go for it. I’m glad I did because I have received lots of positive feedback. 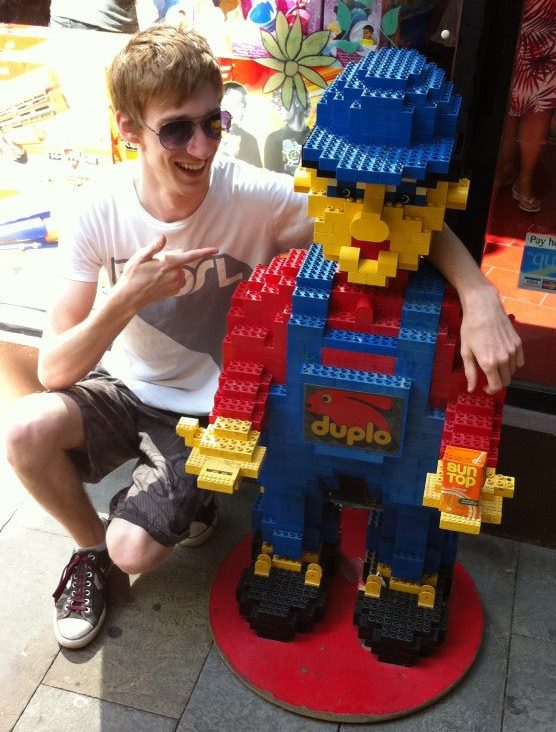 And that’s that.  Here’s the link to Chris’s IndieGoGo page for The Thief if you want to help out.  And you do.  Because how can you say no to that face?  And keep an eye out; The Thief should be dropping in June.  And you’ll bet we’ll be here to report when it does.

Like Loading...
More on Exclusives
Hackers have your PSN Data and here's what you can do about it.