Home » Editorials » Is Portal 2 safe for a Christian family?

Is Portal 2 safe for a Christian family? 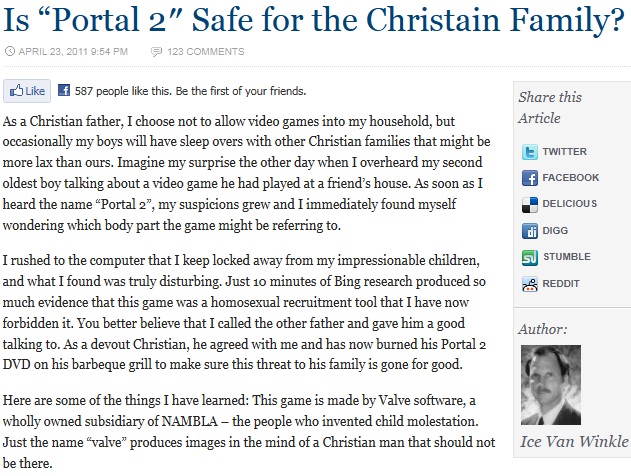 “Modern Warfare 2 lets us experience life as a terrorist”

These are just a few examples of how videogames are portrayed in society, the media loves to place the blame on gaming whenever our kids are doing something stupid. However we think it’s fair to say we’ve found the most insane/hilarious accusation of all.

Ice Van Winkle of Christwire.org was apparently shocked to find his children had experienced a game full of glory holes, homosexual robots,orange lubricant gel and even going as far as to accuse Valve of being associated with pro-child molestation group NAMBLA.

“As soon as I heard the name “Portal 2”, my suspicions grew and I immediately found myself wondering which body part the game might be referring to. I rushed to the computer that I keep locked away from my impressionable children, and what I found was truly disturbing. Just 10 minutes of Bing research produced so much evidence that this game was a homosexual recruitment tool that I have now forbidden it.”

Mr. Winkle goes on to describe the game mechanics, explaining how the character uses mechanical penis guns to traverse through environments which he believes to be gay bath houses.

The full article can be found here and we must stress a WARNING: there is an image used in this article which is unsuitable for children or the work environment.

Red Dead Redemption 2 – What To Steal From GTA 5
Why Call of Duty will never die, at least anytime soon
Alarmists Petition to Ban Sales of Duke Nukem Forever from Wal-Mart
Press Start: Why?