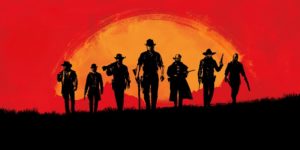 Rockstar Games have their work cut out for them with Red Dead Redemption 2.

As the first game that is to be released since Grand Theft Auto 5 conquered the market in 2013, Red Dead Redemption 2 will inevitably be compared to that hyper-popular release and expected to hit the same bar of quality.  While there are more differences between the two games than mere setting, the similarities are enough to allow Rockstar to take pointers from their prodigal title and merge them into Red Dead Redemption 2, to meet the steep expectations the community has.

Open world maps for games have become more and more commonplace these past few years, especially in the AAA sphere of game development. The criticism most often given to these sandbox titles is that they feel empty; as if the mere size of the open world was the only focus with no regard given to content to fill said world. Rockstar has proven time and again that they’re not one to fall into this trap.

Grand Theft Auto 5’s game world has been almost universally praised as one of the most detailed and content-rich in gaming. The developers didn’t simply litter the map with 100 bits of meaningless collectibles. Rather, they filled the world with the kind of activities players would often lose themselves to in between story missions. What collectibles the game did have were significantly outnumbered by actual side missions. These missions were far from meaningless, offering rewards like special vehicles. The missions carried much of the game’s world-building outside of the main plot. The most noteworthy example was the “Strangers and Freaks” missions, which told small and often bizarre side-stories.

In addition to plenty of content, the world didn’t feel static or “fake” either. Far too often we find ourselves in virtual open worlds which scream “this is an artificial simulation” at every turn, demolishing our immersion. Grand Theft Auto 5 decided to take industry buzzwords which lost meaning after overuse at press shows, words like “vibrant”, “realistic” and “lively”, and crafted a game world which can genuinely be described with them. 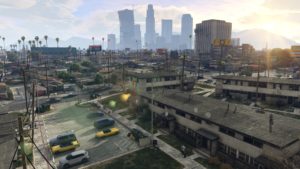 Los Santos feels truly dynamic; Filled to the brim with so much detail and scope for exploration, inquisitive gamers still find new Easter eggs, secrets, and puzzles to solve to this day. Not to mention new single player cheat codes for which the series (and Rockstar to a certain extent) have become somewhat infamous for.

The NPC characters of Grand Theft Auto 5 don’t have a pre-set patrol route around two blocks that they repeat ad infinitum. Rather, they have AI that includes a vast array of behavior types and go about their daily virtual lives without so much as a care for the actions of the player. Unless you’re being violent. Such technology is heads-and-shoulders above what we’ve seen from their competitors.

Another aspect Grand Theft Auto 5 nailed in terms of narrative was its ensemble cast of memorable characters. Many titles fall back on generic tropes when it comes to story-line since, too often, publishers consider it of secondary importance. How many characters could players recall from Brown-Gray Military Shooter #243? (Editor’s note: Brown-Gray Military Shooter seriously jumped the shark with #193.) On the flip-side, Grand Theft Auto 5 showed up with a long list of characters (both major and otherwise) who have complex and quirky personalities which include standouts such as Ron, Denise and Lamar. 2010’s Red Dead Redemption did well in this regard as well, with the eternal classic Herbert Moon still being fondly remembered by fans.

Grand Theft Auto 5 also hit it out of the park with mission variety. You didn’t find yourself doing the same thing over and over. The ratio of on-foot missions to vehicle missions managed to balance itself out. The game made fantastic use of the aquatic and aerial vehicles on hand, and even the combat heavy missions offered variety beyond moving from checkpoint to checkpoint and killing hordes of nameless faces in between. Red Dead Redemption 2 ought to find a good balance between offering players variety without having to introduce new elements and mechanics every two missions throughout the entire game. Everything should more-or-less fall in place by the halfway point in terms of unlockables, but the design team needs to find ways to give us new challenges while the tools at our disposal remain mostly the same.

Rockstar Games has a lot riding on Red Dead Redemption 2. The previous success of Grand Theft Auto 5 gave them the challenge to surpass their masterpiece, which will undoubtedly be no small feat. Luckily, they have plenty of experience to draw upon with which they can polish the game to perfection by the time spring of 2018 rolls around.

Jurassic Park Trespasser: The game that could have changed everything.

Team Fortress 2 Meets Elder Scrolls: Skyrim
Is the Welcome Back program giving you errors? We've got your back.
Five Games To Play After The England Riots
Plight of the Overworked Underpaid Gamer – Part 1