Home » Reviews and Previews » Dark Souls Review or: How I Became A Chronic Hypertensive

Dark Souls Review or: How I Became A Chronic Hypertensive

This reviewer likes to think he’s a stable guy.  Rarely do outbursts and fits of rage occur.  And since Demon’s Souls was able to be completed with little to no major events occurring that led to any damage to hardware or persons in my abode, it’s only natural to assume that Dark Souls would take a similar lead, right?  Right?!

We’ll let science do the talking.  Armed with a clock and a sphygmomanometer, I dove headfirst into the land of dragons and undead.  I’ll monitor my blood pressure in 30-60 minute intervals and present my findings.  Here’s the progress, with spoilers included of course.  Be warned; The real Dark Souls starts here.

This should end well.

Nothing unforgivable so far.  The game introduces you to the controls in a much similar fashion as the introduction to Demon’s Souls did with a little tutorial area.  Because of this, I’ve got a sneaking suspicion there’s going to be a tutorial boss that I’m going to have to die to in order to progress the story.  Broken sword in hand, my starter Thief made his way down the darkened hall. 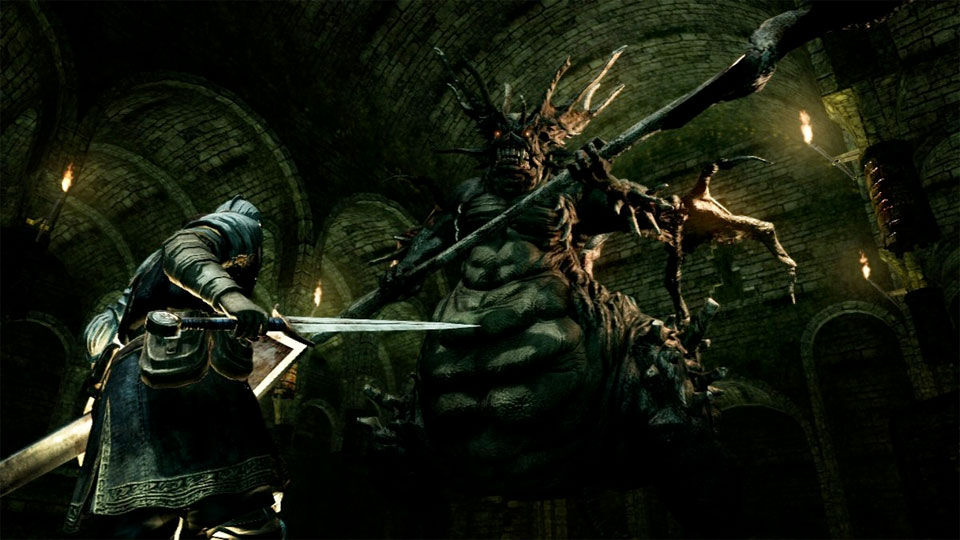 So I was right about the tutorial boss, except I wasn’t supposed to die to him.  Rather, I allowed myself to get squashed like a pancake only to resurrect at the last bonfire I encountered.  No biggie though.  After surveying the area, I found a door that I was apparently supposed to flee through.  I gathered more of my gear including a NOT broken dagger and a buckler shield.  I found myself on a ledge above the tutorial boss.  I spent a few seconds of gathering my courage to drop from the ledge only to discover the boss has wings.  Wings that could pick it up to my level, and smash the ledge into a billion pieces.  Along with me.

So I’ve arrived to where the meat-and-potatoes of the game is going to take place.  A gigantic crow dropped me in what I assumed to be the hub of the world similar to the Nexus from the previous incarnation.  Can’t wait to fill this place with NPC’s.  Aww yeah!  Ran into some skeletons that subtly informed me that I’m not supposed to venture in that direction by slicing me into tiny bits, so I made my way past some undeads to the city.  Noticed that the difficulty has been ramped up since Demon’s Souls via making enemy hits hurt much more than before, letting you know just HOW vulnerable and weak you are in the beginning.

The dramatic increase in deaths can be attributed directly to my first boss encounter.  The Taurus Demon fight seemed a bit unfair to me since my crit-heavy dex-based thief had nothing but melee at this point.  It wasn’t until I noticed the ladder by the door until I remembered that the tutorial pointed out dropping attacks.  Taking advantage of this significantly decreased my rage levels and made me feel like a total boss driving my thief’s dagger into the Demon’s STUPID FAT FUCKING FACE! 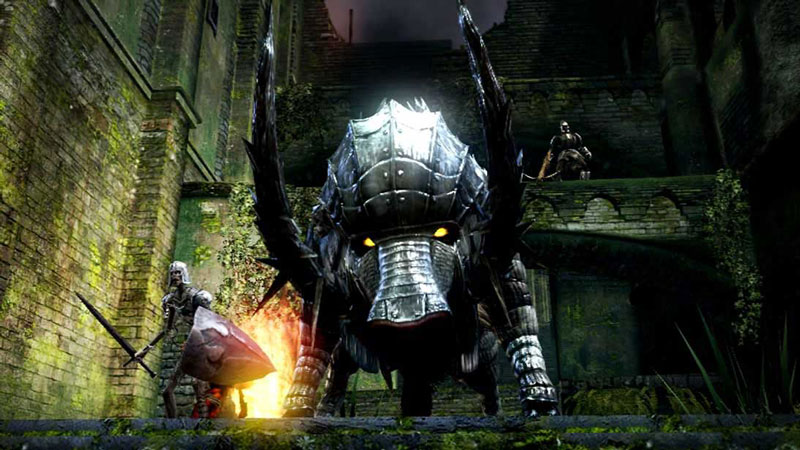 Why yes! I WAS looking to be brutally gored in the anus! How did you know?

Alright, this is just unfair.  I’ll admit, getting roasted by the dragon was my fault.  I should have paid more attention.  But not only do I keep dying like a bitch to stun-locking mobs, this fucker to the right has to show up and ruin my day?  We-he-hell, that’s just fucking Nito.

Anyway, after taking a nitroglycerin tablet to deal with the chest pain I was beginning to have, I made my way past several spastic dredglings and a parry-happy tall undead with a shield to come across a church.  Where I was was promptly stomped into the ground by a mace-wielding, tower shield turtling PIECE OF SHIT WHO REFUSES TO GET BACKSTABBED NO MATTER HOW MUCH I STRAFE GODDAMN JUST DIE ALREADY WHY WON’T YOU DIE?!

I know it’s a boss fight.  I know it’s supposed to be hard.  But for FUCK’S SAKE, CAN YOU BE A LITTLE FAIR FOR NON-RANGED CHARACTERS?  Oh, what’s that?  Now that I’ve got your health down by half, your friend wants to cut in?  Well CHOKE ON MY FUCK YOU FIRE-BREATHING COCK-BANDIT!  I QUIT!  I FUCKING QUIT! 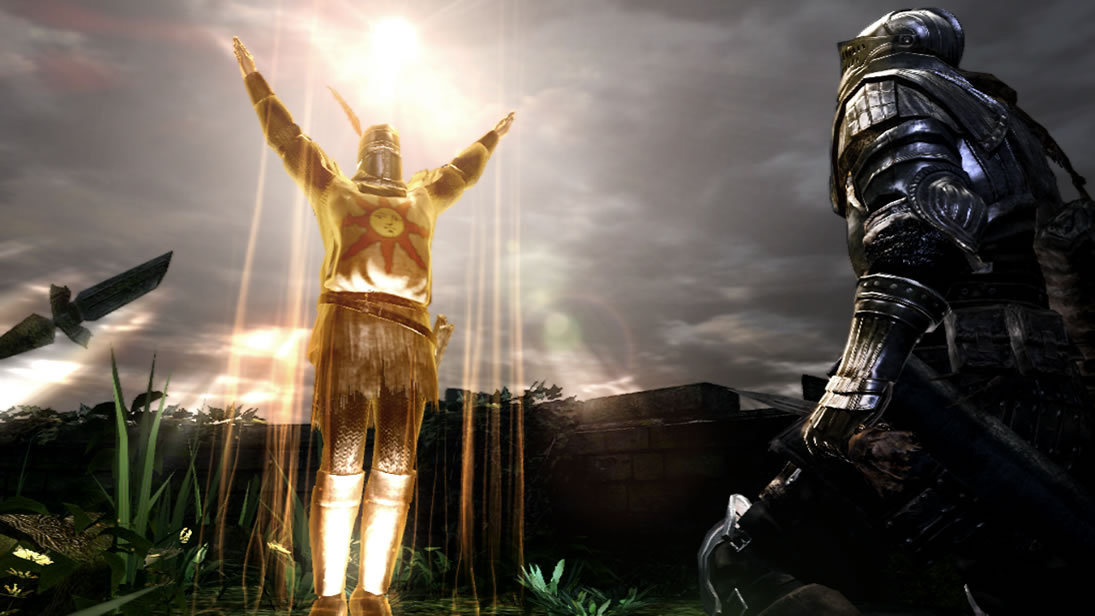 It's the sun! I ain't gotta explain shit!

Found this guy.  Helped me kill Steve and Doug Butabi on top of the church.  Man, I’m a fucking boss.

Made my way out of the church, and found an elevator to the Firelink hub where I rested.  Chatted up that dude in golden armor I freed from the church.  Cool guy.  A little creepy, but eh…this world will do that to you.

I decided to cash in those delicious souls I found along the way and upgrade my character.  Found a smith in the basement of another church across from the church I was just in, so I dropped in and upgraded my dagger to the highest I could go without those special stones they seem to prize so highly.  Found a flight of stairs down to some sunken city.  Saw a bunch of ghosts and tried to fight them, but I could’t hit them.

Probably because they were fucking ghosts.

Found another tower and made my way up to a valley full of dragons.

OH BOY, IT’S THIS FUCKING STAGE AGAIN!  GEE, FROM SOFTWARE!  YOU HEARD OUR COMPLAINTS ABOUT THAT POISON SWAMP, DID YOU?  LISTENED TO EVERY SINGLE ONE AND NODDED YOUR HEAD, DID YOU?  THEN YOU WENT AND FUCKING MADE THE SAME STAGE AGAIN, EXCEPT POPULATED IT WITH EVERY CONCEIVABLE SHITFUCK THAT YOU COULD COME UP WITH JUST TO RUIN WHATEVER SPHINCTER ELASTICITY WE HAD LEFT? 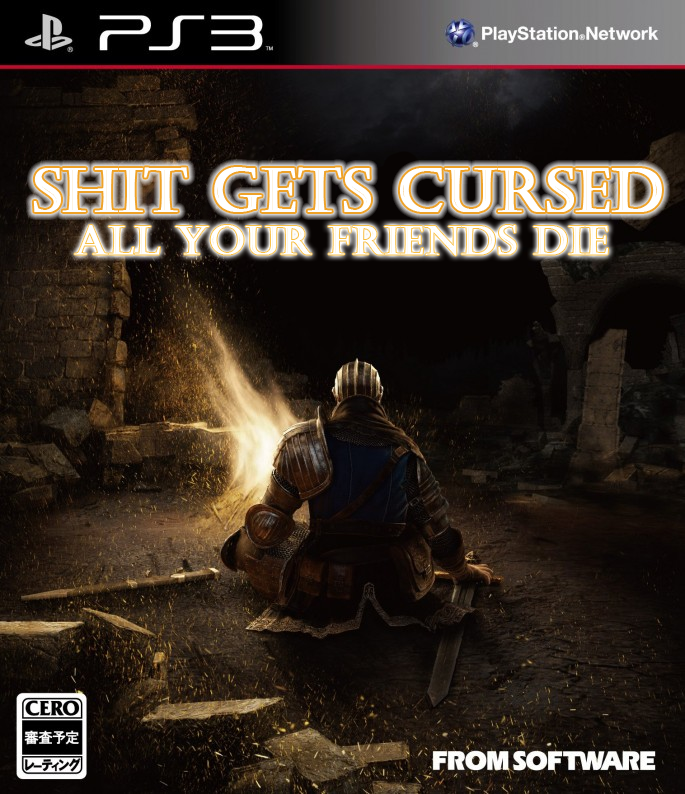 I eventually made it past all of that, and completed the game believe it or not.  Now that I’ve got my blood pressure down to safe levels and have been put on several medications as per the recommendation of the anger management wellness center, I can give a clear-minded 100% review.

Presentation– The art-direction retains a similar high-fantasy theme from Demon’s Souls with the inclusion of several jaw-dropping set pieces.  I remember the first time I set foot in Ash Lake, I had to stop for a few minutes to take in my surroundings.

Then I was spit-roasted by a giant walking clam and an enormous flying hydra.  Not exaggerating in the slightest. 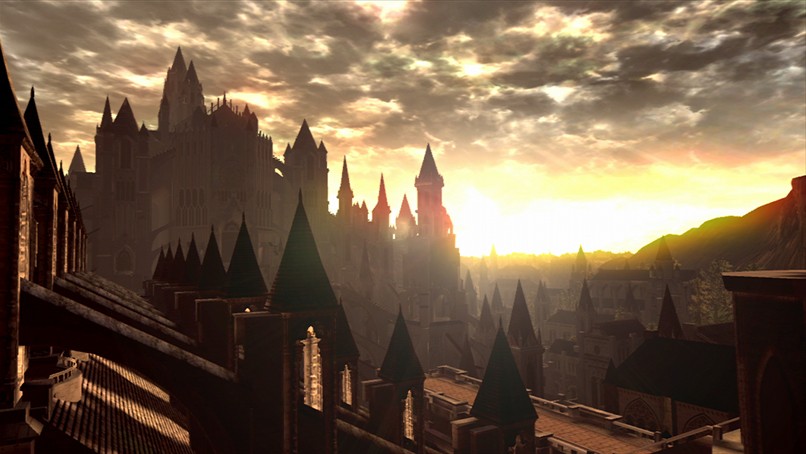 Look at this. LOOK AT THIS!

The presentation itself is very polished, and is in some ways a step-up from its predecessor.  There were a few very rare instances of pop-in and a few jaggies here and there.  But you had to actively be searching for these flaws to pick them out; nothing there the casual observer would notice.

The musical score is top notch.  Just like with Demon’s Souls, I’m finding myself listening to the soundtrack in my spare time.  It’s tasteful orchestral charms have captured my imaginations and ran with it.  Having the tracks as a backdrop to the set-pieces of boss battles is simply (for lack of a better word) epic.  There…that’s my one use of the word I’m allotted for the year.  Seriously…cast your earholes on this!

Gameplay– The same polish applied to the graphics traverses the abyss here and shines in the darkness.  While retaining the same core combat-mechanics Demon’s Souls had, Dark Souls improves on this system by patching up certain weaknesses.  For example, parries and ripostes are MUCH more forgiving timing-wise.  Backstabs seem to have a much larger window to take advantage of/exploit.  But the AI took me completely by surprise when I found that I could be backstabbed and riposted in turn.

The difficulty is just as unforgiving as in the original, but there are a few saving graces.  For example, status effects such as Bleeding, Poison, and Curses have a nice little gauge that fill gradually as you’re being Bled/Poisoned/Cursed.  You’ll be effected by said status effect when the gauge fills up, rather than seemingly at random.

The game is still very much about the loot, and you’ll find yourself grinding for materials to level up your +5 Outlandish Hattery and +7 Lightening Fist of Imminent Rape.  But get used to exactly that…the grind.  Without the right loot and right stats, some bosses (no matter your skill) are nigh unto nearly impossible without a lot of luck and prayer.  But if you ever get in a tight spot, you can summon someone to give you a hand.  And boy, I tell ya.  When you DO finally take down that boss…the feeling of accomplishment is indescribable.  You feel like some sort of big Billy Badass. 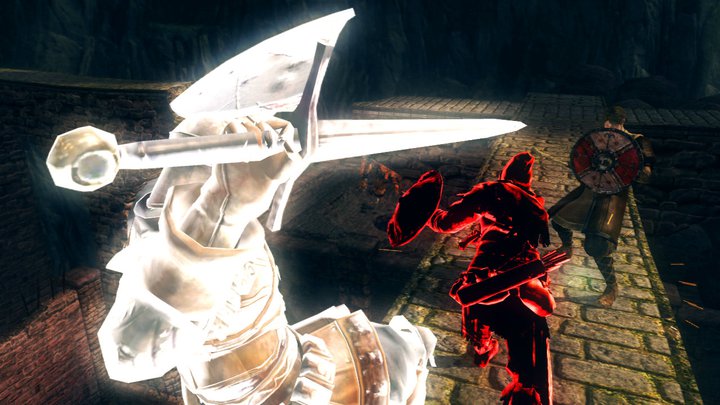 This rarely happens. But when it does...oh man...

And that’s where the game’s weak-point shows up; the multiplayer aspect.  Much like in Demon’s Souls, players can invade or be summoned to another player’s world to harm or help said player respectively.  Summoning is an easy enough task where you stand by a player’s sign as a human and phase them into existence in your plane.  But the life of the summonee or invader is a difficult one.  If you’re planning on being summoned, you’ll find yourself with a lot of time spent waiting around.  And for you invaders, get used to the phrase “FAILED TO INVADE” being burned in your retinas as you use up yet another invading item to no avail.

Not just that, but invasion/summoning systems that are Covenant-specific seem to be downright broken at this time.  There’s talk of a patch on the way to fix this however, along with horrible stat scaling for weapons and a game-breaking item duping glitch.

Although it’s not perfect, Dark Souls still has everything it takes to be a AAA-contender for 2011.  Taking everything Demon’s Souls did and improving upon it for the most part is what many expected, and is exactly what From delivered. Far from being “accessible”, Dark Souls caters to a more hardcore/borderline masochistic crowd who enjoys a challenge. While I died many…many…MANY times, I can honestly say that all of those were due to my own failings as a player and not because of a flaw of the game or engine itself.  That being said, there’s much more room for improvement in both the multiplayer and weapon scaling systems of the game.  But hopefully, the patch mentioned earlier or any future patch-jobs should be a panacea to any ailments the game suffers from currently.