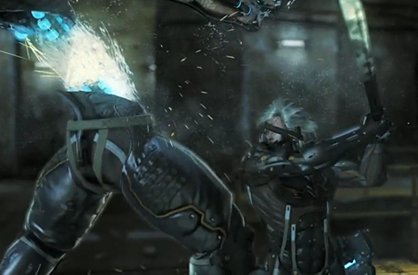 Whispers abound on the internet regarding Hideo Kojima’s recent rash of angsty Twitter posts.  While many argue the merits of rumors that Zone of Enders 3 has been scrapped (say it ain’t so), let the following tidbits of info that’s fallen forth from the internet whet your whistle and stir new rumors as to what work Kojima’s upset about losing.

Gaming blog iWaggle3D reportedly has an inside man who’s given them the following scoops:

1) Metal Gear Solid Rising has switched developers.  It’s no longer under the direction of Kojima Production and is now worked on by Platinum Games (Bayonetta, Vanquish) under the leadership of Viewtiful Joe and Bayonetta creator Hideki Kamiya.  This is the most likely source of Kojima’s upsetting Twitter posts.

3) Next installment in the “main” MGS franchise (Metal Gear Solid 5, basically) is scheduled for this generation as a multiplatform release, with PS3, Xbox 360, the new PSP and “possibly 3DS”.

Let the salivation commence.  I’m hoping that there’s some basis to the 4th point.  There’s nothing more I’d love than to have a digital copy of MGS3: Subsistence with MGO Classic.  Here’s to hoping…