When it seemed the firestorm of online controversy just couldn’t reach a higher fever pitch than what has been seen so far,  there appears another bucket of unleaded to toss onto the flames.

A petition has appeared on AllOut, a website dedicated to building a social movement that strives for LGBT equality.  “So what,” you may say.  “Petitions happen all the time online.”  Ah, but here’s the rub.  The creation of this particular petition  is intended to discuss the “issue” of homophobia that games company EA have brought to light recently.  So what’s the problem?

Well, according to online communities such as 4chan’s infamous video game board /v/ and Reddit’s r/games and r/gaming, several posts by signers have popped up recently that seem a little…stiff.  Almost robotic, if you will.  How so?  For an easy-to-digest breakdown, take a look at the handy infographic below: 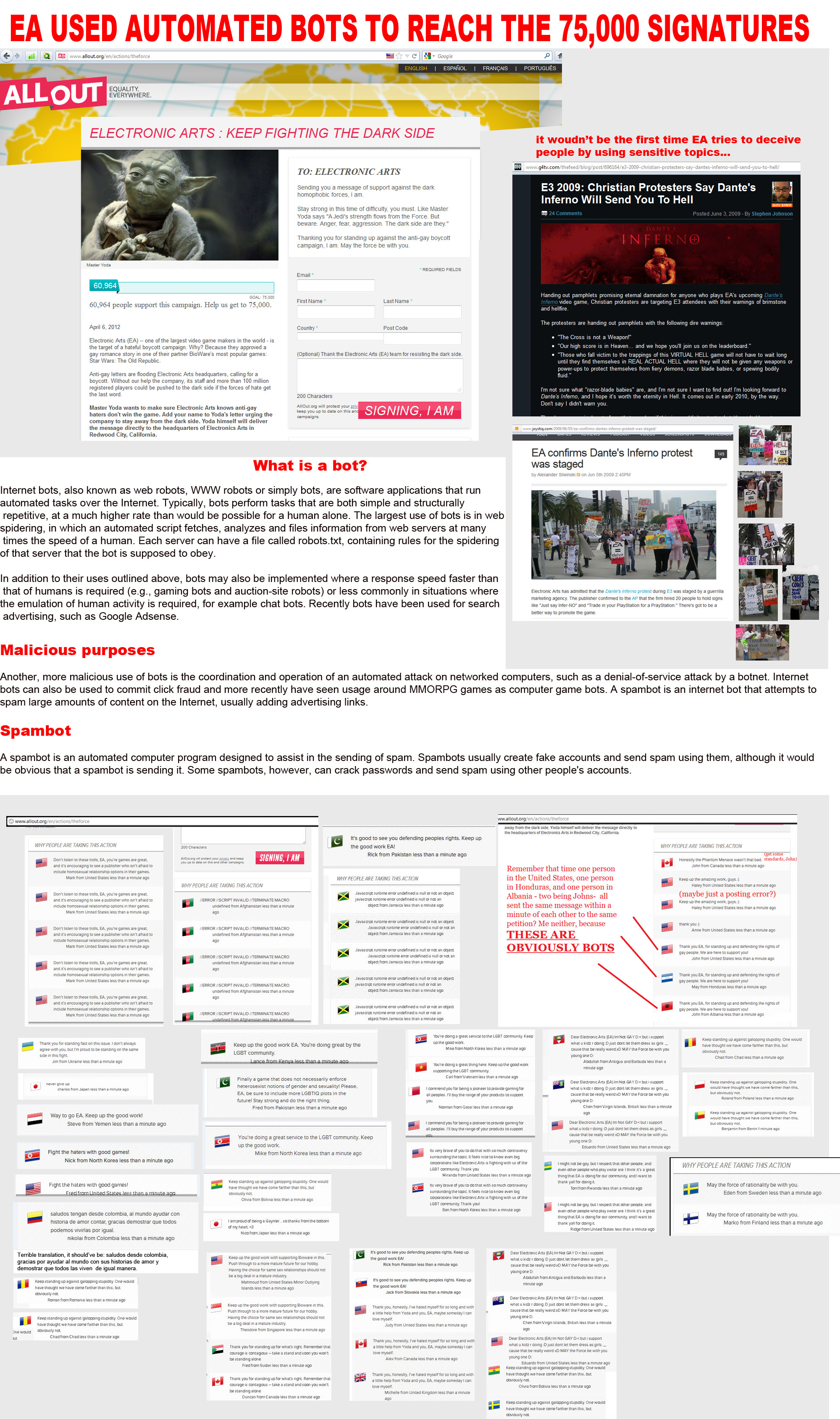 Unethical?  Deceitful?  Possibly.  But it wouldn’t be so bad if we weren’t warned about see this coming ahead of time.

About a week ago, before the mainstream outlets began reporting on the “victimization” of EA at the hands of innumerable homophobic gamers, a journalist posted anonymously stating that such a campaign was not only forthcoming, but was entirely artificial as it was deceitful. 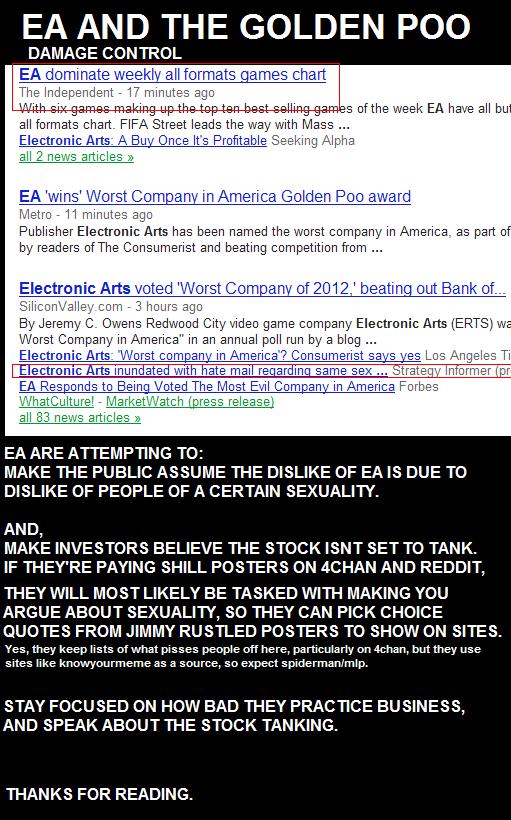 Yes, the issue of homophobia among the gaming community IS a valid issue.  And as such, it is deserving of its own proper debate and evaluation of how the community itself can improve and garner less hostility (real or otherwise) toward the LGBT community.  This is a debate that should (and must) be carried out under its own merits.  But to allow a social movement that many people hold dear to them to get dragged into the muddled mess of a PR power-play is a totally unacceptable act.  Not only that, debasing such a vital movement for the purpose of what’s essentially amounting to exploitation for financial gain is just as offensive as any negative slur you can think of.  Even more so, I’d dare say.

But at the end of the day, there’s one sad truth that may remain: No matter how many petitions gamers make, no matter how well constructed the arguments, it doesn’t seem to matter.

The (few real) people signing the petition EA started don’t care; They don’t read what’s actually going on.  They don’t consider the reason EA is doing it, they don’t know about the Golden Poo, and (most of all) they’re not people who play video games.  They rarely play games (if at all) and don’t have a reason to dislike EA.  Core gamers are, as a whole, just plain out-numbered.  You can’t beat EA at this game because people WILL sign this petition solely out of the attention it seems to get from (what they don’t know are) bots, and because it is pro-LGBT without knowing anything else about it.

It’s important that the LGBT be the defining argument in this controversy. LGBT has nothing to do with the on disc-DLC that shipped with ME3 or the unacceptable terms in ORIGIN. This conflict needs to be defined by the right consumers have to a quality product and ethical treatment. Treatment that EA has been denying its consumer base with continued refusal to provide quality customer support, Repeated and unjustified bans from their forums as well as their games, and their blatant disrespect to their consumer base.

When pressed for better service, to fix bugs, or correct issues within games EA has time and time again responded with neglect towards consumers. Going as far as to insult consumers who are dissatisfied with or disappointed in the content provided in their games. Their mistreatment of fans has gone beyond simply banning people on their forums for having a dissenting opinion, but has stretched as far as insulting their character.  Being painted as entitled children and biggots aside, there are plenty of other reasons anyone would be offended by the actions of EA.

But first, and more to the point, go to All Out’s Facebook page and present them with evidence of spambots.  Inform them of the consequences to their reputation if they allow this to pass with all the spambots in it.  It is doubtful that they’ll be very happy about it.  Or if you’re more the type who chooses to fight fire with fire, a counter-petition has been created to address this very issue.

Six Week E3 Countdown: What To Expect From Microsoft
Video Games and Difficulty
The Terraria vs. TheBestGamers Crybaby-Fest
Jurassic Park Trespasser: The game that could have changed everything.