Remember all those awkward days in school where you had to stand up in front of everyone in class and do some public speaking on the book you read that week? Imagine that instead of a classroom, it was in an auditorium which was being fed live around the world via internet. Now imagine something bad happened while you were reading that book like a sudden breaking of your voice or a nerve-induced expulsion of flatulence. School sucked, didn’t it?

Being a spokesperson at an event like E3 is hard work, you only get one shot at selling what your bosses tell you to sell whether you’re talking about your company’s success or demonstrating something which hasn’t been fully completed. You can either deliver and become a hero of the gaming industry or fall flat on your face while everyone else laughs. We’ve decided to put together a list of the best, the worst and the most painful moments of E3 so sit back and enjoy:

Whether you’ve claimed allegiance to one console or you love them all, there’s no denying one thing, Kevin Butler is hilarious. Portrayed by the brilliant Jerry Lambert, this character for Playstation’s “It only does Everything” advertising campaign first appeared in 2009 in an ad for MLB ’09: The Show, the character started to become more and more popular with gamers for his light insults towards other consoles and his ability to become Vice President of many different areas of work. Rumors started to crop up that the man himself would be making an appearance during Sony’s conference at E3 2010; they weren’t expecting an appearance like this.

Speculation died down as Sony Computer Entertainment’s CEO Jack Tretton came to the stage and was quick to let everyone know that Kevin wouldn’t be there, saying the 50ft mural outside was enough. It came as a shock to everyone when just as an advertising partnership with Coca Cola was being announced, none other than the man himself casually walked on stage to the delight of everyone.

The jokes started when he was told about the rumor that he was going to show up, to which he replied with the classic line from his $299 PS3 ad “You can’t believe everything you read on the Internet”. The fun kept coming with jokes about French acrobats prancing around an arena the previous night, a jab at Microsoft’s presentation to promote Xbox Kinect, followed by his passion for being a gamer, describing us all way too accurately with “Having a ridiculously huge TV in a tiny one-room apartment” or “Staying up until 3am to earn a trophy that isn’t real”.

He finished off his monologue with orchestral music and a backdrop of himself using the PlayStation Move, receiving a roaring applause from the audience at the end. It was something special to see this kind of thing at E3, there was a slight bit of advertising for the Move controller which is to be expected but he was there to get people excited and to give them a good time in the end and it worked, we all hung on his every word. 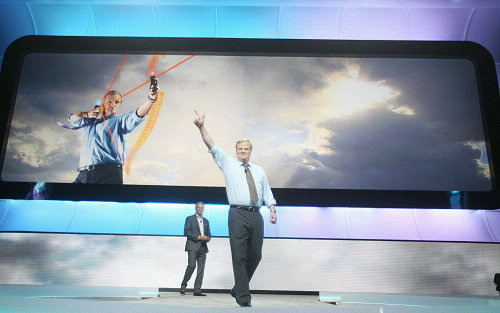 At one point during the Nintendo Wii’s life cycle, it was thought that Nintendo had really lost its core audience. Products like Wii Fit, Nintendogs and Animal Crossing seemed to be the focus instead of the games which made Nintendo the most creative company in the industry. We all went in to E3 2010 expecting the usual, Microsoft and Sony would deliver the games for us while Nintendo delivered the games for our little Sisters. What we didn’t expect was for the complete opposite to happen.

While Sony and Microsoft were trying to capture this new casual audience with their own idea of motion gaming, Nintendo came out and turned the content dial up to eleven, starting with the massive first reveal of Legend of Zelda: Skyward Sword and announcing title after title for nearly two hours including Kirby’s Epic Yarn, Metroid: Other M, Donkey Kong Country Returns, Golden Sun, Epic Mickey and a remake of 007: Goldeneye.

The icing on the cake didn’t come until the end of the conference, after all the talk about Nintendo Wii came to a close we were reminded that Nintendo also does handheld gaming. What better way to finish than the unveiling of a new handheld gaming device? The 3DS was Nintendo’s latest achievement in gaming innovation, offering 3D gaming without the need of glasses. What better way to lead the way with this hardware than an old franchise favorite like Kid Icarus?

Nintendo clearly took home the “Best of Show” award in 2010. We just hope 2011 is another year for Nintendo’s long serving fanbase.

Turns out the answer is “Everything”, the demo was supposed to show mechanics such as 1:1 sword motion, shield lunging and aiming a slingshot. Our very first sight of a new Zelda and we were shown a game with poor controls and motion delay. Fans everywhere could do nothing but continue to watch, hoping the issue could be fixed.

It turned out that the reason for the poor controls was interference from other signals in the auditorium which was proven to be true later on that day after the conference when people could test out the game themselves on the showroom floor. It was a poor sight to see one of gamings greatest icons being embarrassed by one of his own games. It was a critical error which Nintendo should have foreseen before the event, we’ve seen since that it does actually function properly however our first impressions will forever be ruined because of this. 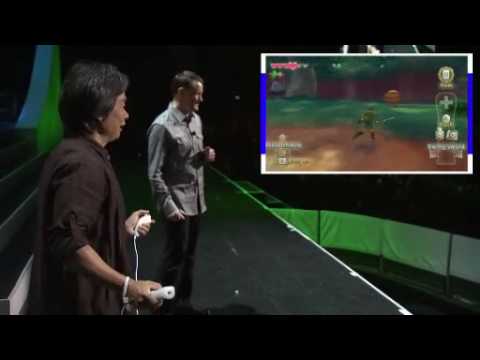 One of the best things about being a gamer is that we have the ability to pick out the non-gamers from a mile away, whether they’re telling us that they’re going to pre-order Oblivion 2 or pretending to be part of the geek chic crowd by saying “Teh caek is a lie” followed by the question “What’s Portal”?

Microsoft’s ’09 conference got off to an impressive start with a demo of the upcoming Beatles: Rock Band, it was music we could all enjoy. A few minutes later it got even better, with an appearance from two of the biggest musicians on the planet, Sir Paul McCartney and Ringo Starr. A standing ovation from the crowd was followed by an on-stage speech about how much they enjoyed being part of the game…at least we think they did.

After pretending to quietly talk to each other about the game, Paul then went on to say how great it was that he was in a game or to put it in his words “Who’d ever thought we’d end up as androids“. After a weird time-wasting impression of Ringo’s in-game character walking, Paul finished off by thanking the organizers for inviting them to their ‘game-show’. They didn’t buy a single vowel.

It was one and a half minutes of ruining a perfectly good opening to a conference, going to show that it doesn’t matter who you pay to promote your game, money can’t buy you love. 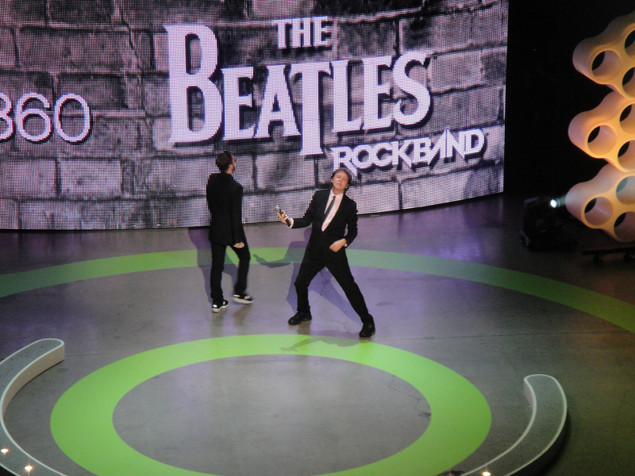 Describing these moments through text would not be half as effective as actually showing you through the medium of video, get ready for the horror:

This last memory has had us stumped for weeks, we weren’t sure if we should label it as “Good”, “Bad” or “Ugly”. To put it one way, it was a show of insane brilliance, we didn’t know whether to laugh, cry or be afraid. One minute we would be watching a developer describe his “extreeeeeeeme” game, the next we would be watching three Mexican wrestlers slapping each others chests.

It’s debatable whether or not they were trying to be taken seriously, they seemed to go for this method of selling their games by trying to entertain us at the same time…we were definitely entertained at least.

I’m sure by now you all know who we’re talking about but for those who don’t, here is a perfect summary of Konami’s E3 2010 conference.

Come back next week when the Lo-Ping staff talk about what makes E3 special for them along with their best memories from the show.

Community Piece: On Optimizing the #GamerGate Harassment Patrol
Humour Article – Dead Island: Fist of the North Star
Retro Gaming: Why Do We Do It?
Six Week E3 Countdown: What To Expect From Sony