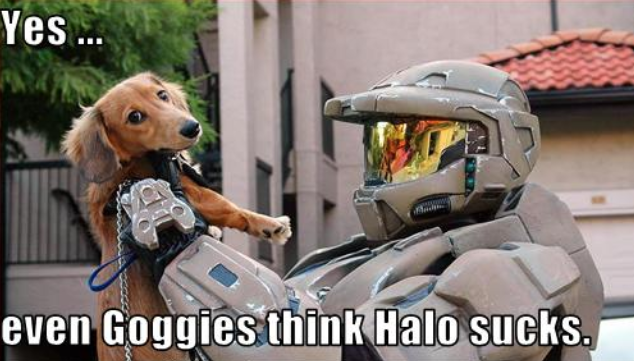 The anniversary of Halo 4’s release is approaching, and we thought this would be a great time to examine and try to understand some of the hatred we’ve seen towards the Halo franchise. First, let’s look at the current trends on Halo hate:

I figured I’d go to our Editor-in-Chief, Jamal, and get his opinion on the Halo franchise:

I play Halo semi-regularly because my friends do, but to be honest, I literally feel nothing about the series. The multiplayer is… nice. Bungie supports the heck out of it, and gives it love, but… it’s just… flat. No interesting mechanics, turtle-slow gameplay, etc. It’s fun, don’t get me wrong, and the big vehicle maps are great, but otherwise the game is just mediocre. The weapons are boring to look at and use, other than the needler maybe. Maps are nothing special. The art direction is boxy and uninspiring (fantastic skyboxes though). Not to mention there are SO many things about the campaign that bother me. The environments always feel like they are thrown together in G-Mod or something, Bungie never utilizes set pieces or environmental immersion. Not to mention two weapon limit KILLS weapon variety. It’s a myth that Halo forces you to be tactical with weapon choice, since most of them are redundant and the power weapons are one-trick ponies you use at the beginning or end of a level.It’s good for a console FPS but underwhelming is the only word I would use to sum up Halo. My main problem with Halo, beyond the obvious things like the extreme sluggishness of the gameplay, dumbed down weapons, and poor plot and storytelling, is that Bungie CANNOT utilize environments correctly. Nothing interacts with anything. Static, flat buildings and obvious railroading everywhere. Illusion of freedom is incredibly jarring. You just wander around these poorly implemented areas with zero immersion or pacing, it’s like I’m still playing Quake 2.

I’ll play Devil’s Advocate on this one:

Halo games in general are pretty colorful, have lots of large outdoor levels, have interesting weapons and aren’t concerned with realism. Even if you think the games are mediocre or bad, that’s all you can really say. Halo didn’t ruin the FPS genre. Most of the terrible aspects of modern FPS’ (grimdark, tacticool, hallways, etc.) aren’t present in Halo at all, so saying that it somehow killed everything fun about old shooters is ridiculous. The only argument you have is regenerating health, and if you honestly think that’s enough to ruin a genre you should get your head out of your ass and try to have fun for once in your life.

As long as we’re at it, here’s a third party’s opinion:

I don’t hate Halo. I think that when people say they hate it, they just hate what it’s become. The first FPS I played consistently was Unreal Tournament: GOTY, and I played it religiously for years. I’ve played Quake and Counter-strike, both 1.6 and Source, but UT:GOTY has always just felt right to me. After that, I played both Command & Conquer: Renegade and Battlefield 2, both gave me a newfound love for both team-based gameplay and a large array of vehicles to choose from. While few will dispute the rather awful balancing with these two games, they were some of the most fun I’ve ever had with first person shooters.

I saw Halo was coming out with a port to PC, and people were talking about how it had amazing enemy squad AI, a large amount of vehicles to toy around with and I thought, fuck yeah, this game is going to be amazing.

When it actually did come out though, I felt like I had been lied to. The weapons were nice, the story was boring(I understand this is subjective), the vehicles were good, but it ultimately did nothing new aside from dedicated grenade and melee. That’s lovely and all, but nothing about the experience I had with Halo makes me feel like it warrants the ridiculous amount of praise and fanbase numbering in the millions that it has.

The ultimate truth about it is that the vast majority of Halo’s fanbase doesn’t know anything of first person shooters other than Halo. It’s not a bad thing, people need to stop acting like it is. To act like Halo actually revolutionized anything is illusory though, as all it did was set trends that really, really need to be done away with.

Now that you’ve heard ours, what are your thoughts on the Halo franchise? Do you believe it has earned the right to be considered one of the biggest games in history or do you think it’s just an example of excellent marketing? Let us know in the comments section below.