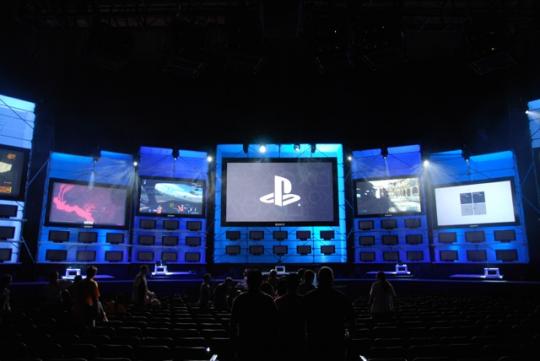 Alright, so our minds are thoroughly blown by Sony’s dubstep-heavy presentation.  So collect your brains off the wall, and cast your eyes this way.  Here’s your Sony Conference E3 breakdown.

SONY GENERAL
After a very lengthy intro, Jack Tretton came out with the obligatory introduction thanking everyone for joining them.  He began by addressing the recent PSN outage, this being his first time addressing the issue.  After mentioning their retail partners, he formally apologized to the consumer base for the inconvenience that occurred.

-CinemaNow was announced as a new partner to deliver free television and movies to users of the PlayStation Network.

UNCHARTED 3: DRAKE’S DECEPTION
-Naughty Dog co-presidents Evan Wells and Christophe Balestra came out to feature Uncharted 3’s demo.
-The demo  features Drake running about on what appeared to be the deck of a cruise ship during a storm.  After infiltrating the lobby, he stealthily takes out an armed guard, and proceeds further into the room lit by the giant swaying chandelier above.  Overall, the demo looks absolutely stunning, and really showcases stealth gameplay by taking out guards in a variety of quiet fashions.  Which either means Drake’s a master infiltrator, or the guards were hired directly from Shadow Moses.  After being cornered by guards, a firefight erupts in which an explosion begins to flood the ship.  The ship then begins to capsize, and he’s forced to escape the rapidly sinking now-sideways ship via several quick-time events.  The demo closes with Drake running away from a tidal wave.
-Multiplayer beta begins June 22.
-Subways offer early access to COMPLETE multiplayer experience.  Not a beta…ENTIRE GAME!
-They then featured Uncharted 3’s 3D experience while featuring a few key story elements, while suggesting a few (multiplayer?) co-op opportunities with Drake and Sully.
-Release date for Uncharted 3: 11/1/2011

Resistance 3
–Marcus Smith from Insomniac came out to showcase Resistance 3.  He gave a breakdown of where the story previously left off.
– As the trend seems, the audience was informed to put on their 3D glasses
-Over all, nothing groundbreaking was seen that hasn’t been seen before from the Resistance series.
-Giant crawlers everywhere, running through crumbling buildings, cats and dogs living together, mass chaos.
-JESUS CHRIST, I HAVE NO IDEA WHAT’S HAPPENING HERE!
-“3 minutes of Resistance 3 in 3D”  JOKE SO FAHNNY!
-Resistance 3 Sharpshooter Bundle: Resistance 3, PSMove camera and controller, sharp-shooter for $150

PlayStation Move
-Pointed out 8.8 million units sold
-Chris Snyder and Eric Boenisch from 2K sports featuring Move support for NBA2K12, “NBA on the Move”
–Players can physically target players they want to pass to, shoot, etc.
—Editor’s note: I cannot physically express how much of a fuck I don’t give
-And suddenly, Kobe Bryant.  YEEEAH!  YEEEAH!  YEEEAH!
-Playing a friendly match with them, and losing.
–Shit, Kobe!  Get it together!
-Medieval Moves: Dead Man’s Quest
–“Please put on your 3D glasses” (That’s a shot for those of you playing along at home.)
–Game essentially combines all activities done in Move Champions (sword fighting, archery, etc) and places the player in a fantasy setting
–No inventory system.  Just move from one weapon to the next depending on what motions you perform.
–Good work, Jeremy!

StarHawk
-Pre-rendered CGI trailer played, featuring all the caveats a spiritual sequel to Warhawk would have: ground, air,  and vehicle combat, along with a mech here and there.
-Possible space-battles?  Oh man, that’d be awesome, Jeremy!

Sly Cooper: Thieves in Time
-Trailer revealed, has our beloved raccoon leaping from rooftop to rooftop and using his signature hook to move across lines.
-Takes off mask: it’s Dmitri!  WHAT A TWIST, Jeremy!

EVE Online Crossover
–Dust 514 as a PS3 exclusive, connects with EVE Online
-Extends experience to NGP
-“One Universe, One War”
-Trailer featured a futuristic FPS shooter where console players can fight wars for PC users’ corporations for profit.  Rewards unknown as of yet.
-Closed beta and full release by 2012!  Better get on that, Jeremy! 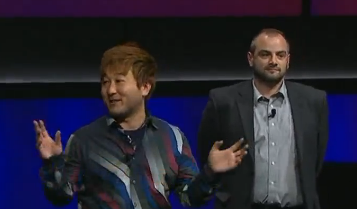 –Bobby Lee comes out to reveal teaser trailer; exactly what you’d expect from the title
–Cole from Infamous will be joining the roster; realtime gameplay with him fighting Ryu with a variety of unique moves.
-Will release holiday 2011; Wifi only model for $249, 3G for $299

Lo-Ping Exclusive: The Making of FortressCraft Trailer
The Revolutionists
Valve to Offer Refund For Every Sold Copy of From Dust? [UPDATED]
First 14 minutes of L.A Noire – Gameplay