Back at Ubisoft’s E3 event in 2010, Ubisoft showed the world the revival of a much loved platform game by the name of Rayman, since that day we’ve seen nothing of the floaty limbed hero…until now 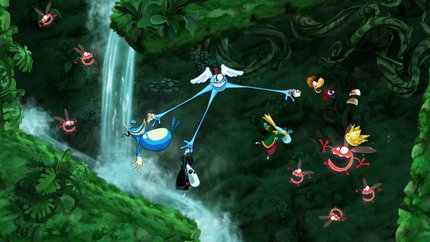 Ubisoft has revealed details about the upcoming side-scroller, Rayman: Origins Stating that it will feature gorgeous 1080p HD visuals aswell as co-op gameplay with up to three other buddies, relying on each others unique skills to make it to the other end alive.

As a reboot of the franchise, Origins is set in the Glade of Dreams, a world created from the mind of the Bubble Dreamer, returning characters include Moskito, Globox, Betilla the Fairy and the Electoons. When the Bubble Dreamer starts having nightmares, evil creatures start to populate the world, it’s up to Rayman and his friends to return the world back to its peaceful state. The game also features a total of 12 enviroments to navigate through on Rayman’s quest

Players are able to drop in and out of co-op play as either Rayman’s sidekick from his last big outing, Globox or as one of two Teensie Wizards. As well as helping each other out, you and your friends have the oppurtunity to engage in some light-hearted fighting as a distraction from the game. 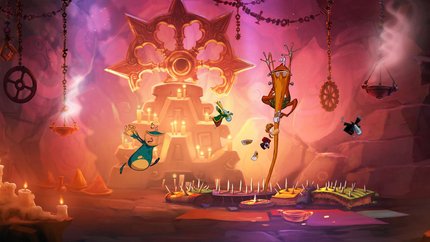 The game is primarily 2D but the player can jump between different planes (think LittleBigPlanet) with the game blurring out the other plane to help the player focus on what he’s about to jump to.

We’re really excited for this game, Rayman has never quite been the same since he made the switch to the third dimension and the limelight has been stolen from him in recent years by those pesky rabbids so it’s nice to finally get a chance of going back to basics when Rayman: Origins ships on Xbox 360 and Playstation 3 later this year. We’ll update this page as we hear more

A Look at Skyrim and Why it's NOT Oblivion